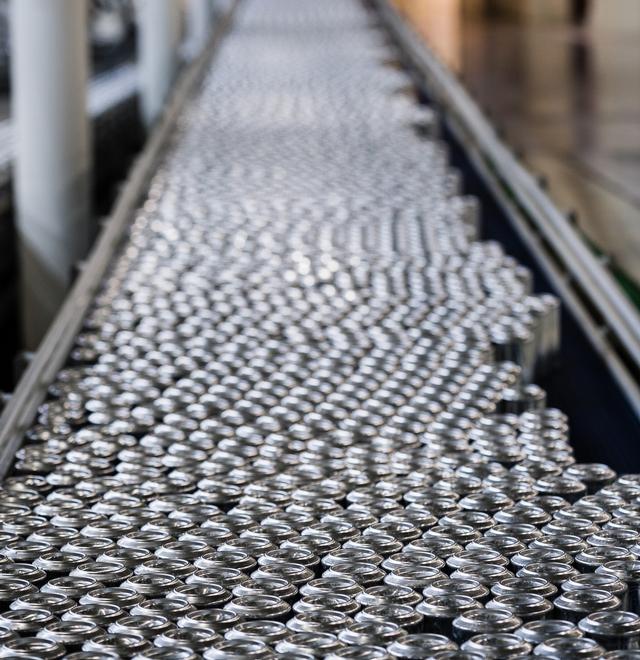 RICHMOND—Governor Ralph Northam today announced that Crown Holdings, Inc. (NYSE: CCK), an industry leader in metal packaging technology, will invest $145 million to establish a manufacturing operation in Henry County. The company will build a 355,000-square-foot aluminum beverage can production facility in the Commonwealth Crossing Business Centre. Virginia successfully competed with North Carolina and South Carolina for the project, which will create 126 new jobs.

“We are thrilled to see a longtime Virginia employer and Fortune 500 company like Crown Holdings select Henry County for its new East Coast manufacturing operation,” said Governor Northam. “The addition of 126 high-quality jobs is a huge opportunity for the people of Southern Virginia, and the region’s tireless efforts to build a skilled workforce pipeline will benefit the company for decades to come. We thank Crown for again choosing to reinvest in the Commonwealth, and look forward to its continued success here.”

Founded in 1892 and headquartered in Yardley, Pennsylvania, Crown Holdings, Inc., through its subsidiaries, is a leading global supplier of rigid packaging products to consumer marketing companies, as well as transit and protective packaging products, equipment, and services to a broad range of end markets. Ranked 272 on the Forbes Fortune 500, Crown Holdings has operations in 47 countries employing over 33,000 people. Operating in Virginia for more than 60 years, the company has facilities in Frederick County and the City of Suffolk as well as subsidiary operations in Henry County and Pittsylvania County, employing more than 200 total employees.

“This project is much-needed good news as we work to create quality jobs during the pandemic,” said Secretary of Commerce and Trade Brian Ball. “Southern Virginia continues to attract manufacturing projects that build on its industry legacy, and we are committed to working with our partners to provide the business environment and the talent pool to support it.”

“This investment further demonstrates Crown’s commitment to support its customers in meeting the increased demand for aluminum beverage cans,” said Timothy J. Donahue, President and Chief Executive Officer of Crown Holdings, Inc. “The Henry County plant will give Crown a stronger position in the specialty can market, while allowing Crown to better serve the needs of customers and consumers for more sustainable packaging. On behalf of Crown, I would like to thank our many partners for their enthusiasm and cooperative effort in this initiative, including Governor Northam, the Martinsville-Henry County Economic Development Corporation, Henry County, the Harvest Foundation of the Piedmont, Southwestern Virginia Gas, Appalachian Electric Power, Mid-Atlantic Broadband Communities Corporation, and the Virginia Economic Development Partnership.”

The Virginia Economic Development Partnership (VEDP) worked with the Martinsville-Henry County Economic Development Corporation to secure the project for Virginia. Governor Northam approved a performance-based grant of $3 million from the Virginia Investment Performance Grant, an incentive that encourages continued capital investment by existing Virginia companies. Governor Northam also approved a $1 million grant from the Commonwealth’s Opportunity Fund to assist Henry County with the project. Crown Holdings is eligible to receive benefits from the Port of Virginia Economic and Infrastructure Development Zone Grant Program, as well as the Virginia Enterprise Zone Program, administered by the Virginia Department of Housing and Community Development. Funding and services to support the company’s employee training activities will be provided through the Virginia Jobs Investment Program.

“The investment of $145 million is the largest initial capital commitment a company has ever made in Henry County,” said Jim Adams, Chairman of the Henry County Board of Supervisors. “That commitment shows the faith that Crown Holdings has in our citizens and our team. We are beyond excited about this announcement and we look forward to a long and fruitful relationship.”

“This investment by Crown Holdings, Inc. in Henry County is an important addition to Virginia’s growing food and beverage packaging industry,” said John Reinhart, Virginia Port Authority CEO and Executive Director Emeritus. “We have invested in our terminals to better serve clients like Crown Holdings and its peers, and we look forward to helping this industry expand into new international markets.”

“This announcement by Crown Holdings is yet another success story for our region on why industries want to ‘build it here and keep it here’ in Henry County,” said Senator William M. Stanley. “We have worked hard to restore this community as a leader in manufacturing, as it once was not so long ago. Crown Holdings is a great partner with Henry County, and will be both now and in the future. More than 120 citizens of our area, and their families, will benefit from this significant investment with these new jobs. I can’t thank the Governor and VEDP enough for their continued focus on job creation in our region.”

“This is a great day for our region with Crown Holdings, Inc. bringing 126 new jobs to Henry County,” said Delegate Danny Marshall. “We welcome the aluminum beverage can manufacturing plant to Commonwealth Crossing Business Centre. The $145 million investment, along with all the jobs created, will provide an amazing boost to the local economy. We appreciate Crown Holdings for building its new manufacturing facility here, and we wish them the greatest success.”